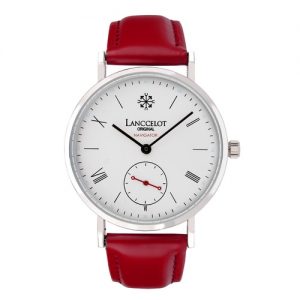 Navigator of Merlin $99.00
Back to products
Next product 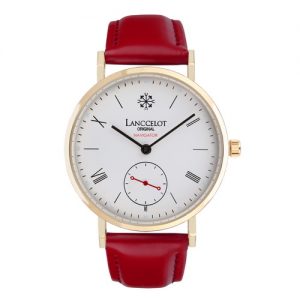 Inspired by the sailing ship, a large wind-powered vessel. Everyone will take a turn to be the active manager of the ship in order to maintain the direction for some period. Same goes to Lanccelot Navigator series, every journey will need a direction and a direction should be maintained by Navigator. Navigator series making it a timepiece that suitable to accompany each adventure. Leather strap or even Nato strap are perfect to be combined with the case on this timepiece. The round dial and a wide range of color for the strap in every Lanccelot watch will make you look booth gorgeous and classic each and every day by wearing Navigator Series from Lanccelot

Lanccelot brings the Navigator Watch series for you who love to do adventure but still want to look classic, elegant, and prestigious. Gold body and black plate will be the best pair so you can wear this watch to the ballroom dance with your crush. The high quality materials are still the main thing that made this watch. Lanccelot will never disappoint you.

If you adore the founder of one of dynasties in Egypt, Saladin, then you the Navigator of Saladin from Lanccelot will be a perfect partner for you. Saladin was the first sultan of Egypt and Syria who also found the dynasty of Ayyubid. He was the leader of Muslim military that fought in Levant to tear apart the Crusader state. He described the strength of a leader and was brave enough. Other than in the Levant, based on the legend of Sultan Saladin also led the fight against the Crusader in Palestine. Sultan Saladin was really a brave man and good leader, even the name had a meaning of the right on the faith. Lanccelot wants to create this kind of spirit through the Navigator of Saladin.

The history of Sultan Saladin mythology was great. He was the conqueror of several countries in Middle East. He was also touted as the hero of many people in Middle East. Besides the braveness, Saladin also had the leader personality that will be described in this watch by Lanccelot. In order to bring the history into the fashion watch, Lanccelot combines the gold and black plate with green leather strap on this fashion watch. The green color is supposed to describe the peace and the symbol of fighting. In general, green also bring the natural sense back just like Saladin who tried to chase away the Crusaders.

It is a fact that Lanccelot put the focus to make the Navigator of Saladin to lead people to the higher level of braveness and peace when it comes to wearing this watch. As a person who put Navigator of Saladin on the wrist, we hope that it can give the affection of leader and braveness just like one of the mythical creatures mentioned in this article. On the other hand, Navigator of Saladin is a good selection to get inspiration since green strap describes the fresh and inspired mind. Indonesia is the place that was chosen to make this watch from Lanccelot.

$62.30
Shop
0 Wishlist
0 items Cart
My account
close
Start typing to see products you are looking for.
Scroll To Top